I work with a lot of musicians: shooting photos and videos, editing, and audio recording. But I also work on music projects on my own or collaborating with others, where I write and perform. Here are two of my current projects:

The Spirit World and Lost Nation Project
This is a CD project with my uncle, John Gunter. John plays Native American flute and I’m playing guitar and keyboards (and some percussion, and bass, and banjo, and mandolin, and harmonica.) All of the songs are original compositions.

Because of the nature of the Native American flute, the sound feels indigenous. This is appropriate with the themes we explore in the music (see below.) But, at the same time, we work with contemporary styles with the flute layered on top. So folk, new age, and pop sounds are underneath.

The project evolves around two separate but interwoven themes: Spirituality & The Lost Nation (the loss of culture)

Spirit World — the name of the CD is Spirit World. John explores through meditation and mindfulness the ideas that the spirit world can interact with the physical world. He incorporates spiritual guides, and some like the bear, can come in the shape of animal forms. He brings the eagle’s flight into the songs. His flute playing can be very emotional, as present in the song Memories.

Lost Nation — this is my phrase for those of us who has lost their ties to their ancestral cultures. If you read your history, you can learn about the Indian boarding schools in the United States (and similar things happened to indigenous people in other countries.) This is personal for me in that my great-grandmother was taken from her native family and raised in the white man’s world. From stories passed down, we know that she was Sioux, probably from the HunkPapa (Lakota) tribe. (Stories passed down included that we were related to Sitting Bull in some way.) But we can’t prove any of it. We just have fragments of stories.

Artie Melissa Shaw was my maternal great-grandmother who married George Ensminger. My grandfather, William Ensminger, died when my mother was a teenager in a farming accident. My siblings and I also have some native ancestors (as does my Uncle John) on my Dad’s side of the family, but we know even less about their histories. (We know they were Cherokee and Wyandot.) 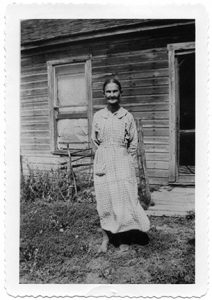 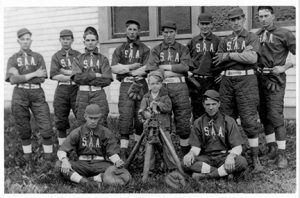 Photos: Artie Melissa Shaw Ensminger in front of her house, circa 1930s. William Ensminger (her son, my grandfather) is the ballplayer standing in the back row, second from the left, in the old baseball photo.

As a side note, because of my ad agency’s offer to create free graphics for any school that is changing their mascot from an Indian name, and my involvement in other projects in the Native American community, there was an article written about my agency and myself that says I am Indian. I never made that claim, the author of the article was doing a little embellishment or was confused. I’ve shared the story of my Indian ancestry, but I am absolutely of mixed blood that includes some Native American, some English/Welsh/Irish, some French, some German, and probably a lot more. I don’t identify strongly with any those and try to appreciate them all. (French in that the Ensmingers came from the Alsace-Lorraine area of France, which has been both part of France and Germany at different times in history.)

Cartwheels for Voodoo is my studio project where I work on electronic music. It has its own website, check it out: CartwheelsForVoodoo.com.